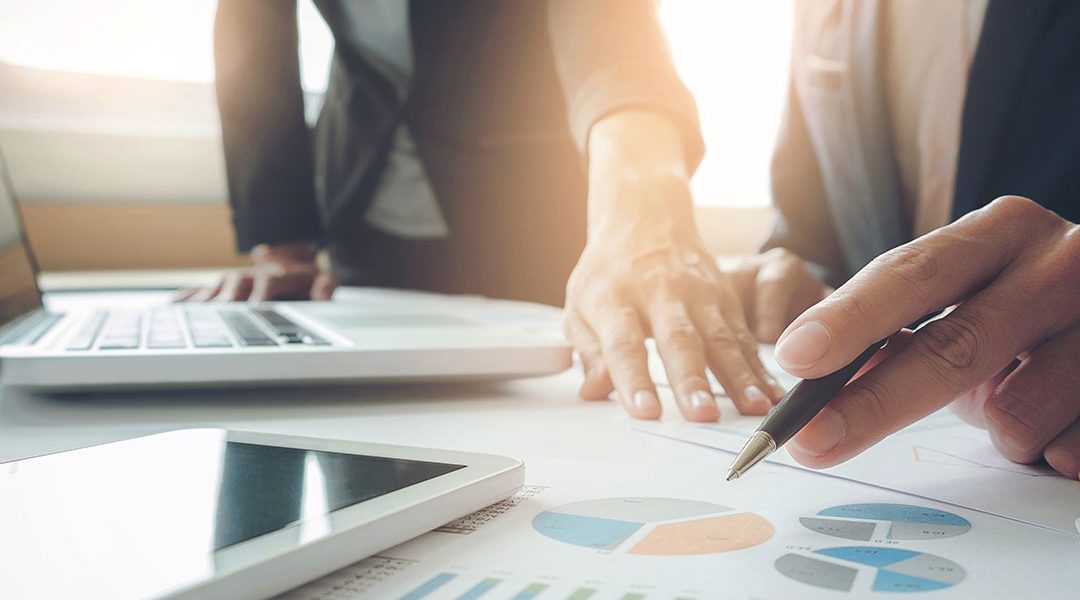 Exchanged Traded Funds (ETFs) were first introduced in the early ’90s with the introduction of the SPDR S&P 500 Trust (ticker SPY) by State Street Global Advisors. Over the last 30+ years, ETFs have experienced widespread adoption with investors and rapid growth in assets. Much of this growth came at the expense of traditional mutual funds. With billions of dollars in investable assets at stake as well as the fees those dollars generate, the Wall Street marketing machine has been working overtime espousing the benefits of ETFs compared to traditional mutual funds. But is the ETF structure truly superior?

Like various things in life, the correct answer is much more nuanced, with distinct advantages and disadvantages for both mutual funds and ETFs. We believe investors can be well served using either structure, however, compared to mutual funds that are already managed in a low-cost tax efficient manner, many of the purported benefits of ETFs are at best overstated or at worst may even place the investor at a disadvantage.

Before we dive into analyzing these two investment vehicles and which might be right for your unique situation, a little background may be helpful.

In simplest terms, both mutual funds and ETFs are structures used to hold portfolios of stocks, bonds, or a combination of both. ETFs trade on an exchange like stocks while Mutual Funds trade directly with the fund provider. Both structures can give investors an efficient and low-cost way to access capital market returns.

To help clarify the major differences between the two structures, we will look at four relevant variables:

Most investors are familiar with commissions, so we will start the analysis here. Commissions are simply a fee paid to buy or sell a fund. Although commissions vary by custodian, we will limit our analysis to variables that our clients are exposed to.

Trading commissions have been under pressure for many years. ETFs now trade commission-free, while some, but not all mutual funds trade with a small fee ($9.95). Although zero is certainly better than $9.95, this benefit is usually not material, particularly for low-turnover strategies. For example, with a $1m portfolio, our yearly mutual fund commissions might average $50 annually for a total cost of .005%, hardly a game changer ETF sponsors would like you to believe. It is also important to note mutual fund commissions are likely to be pushed to zero just like ETFs. So, while this very slight benefit currently favors the ETF structure, it is neither material nor likely to be persistent.

Unfortunately, commissions are not the only trading costs that need to be considered. Unlike mutual funds which trade at their NAV price directly with the fund provider, ETFs trade on an exchange at the Bid/Ask prices.

Spreads change daily and can be immaterial for some ETFs (SPY), while very material for others (INFR). Regardless of its size, the spread is a cost associated with trading ETFs. Where does the spread go? Some of it will is used to pay for order ﬂow. Charles Schwab’s legal department outlines the relationship below:

“As part of a common industry practice known as Payment for Order Flow, Schwab receives rebates from liquidity providers and certain exchanges based upon the order ﬂow executed at each destination”

Brokers commonly use the rebate to subsidize or replace traditional commissions. So, ETF trading is not really “commission-free” as some would like you to believe. Rather, you are paying to trade, just in a much less transparent way.

So, what is cheaper to trade, a mutual fund or an ETF? It depends.

In addition to the spread, buyers and sellers of ETFs need to be aware of the fund’s premium and discount. As the name implies, a premium exists when ETF’s price is more than the fund’s NAV or the value of its underlying securities. A discount exists when the ETF’s price is less than the NAV. Depending on which side of the transaction you are on, a premium or discount can help or hurt.

Premiums and discounts need to be monitored as they change daily and can be volatile, particularly during risky markets. For example, during “Peak Covid” in early 2020, many fixed income ETFs traded at a material discount to their NAV as shown by the chart below. 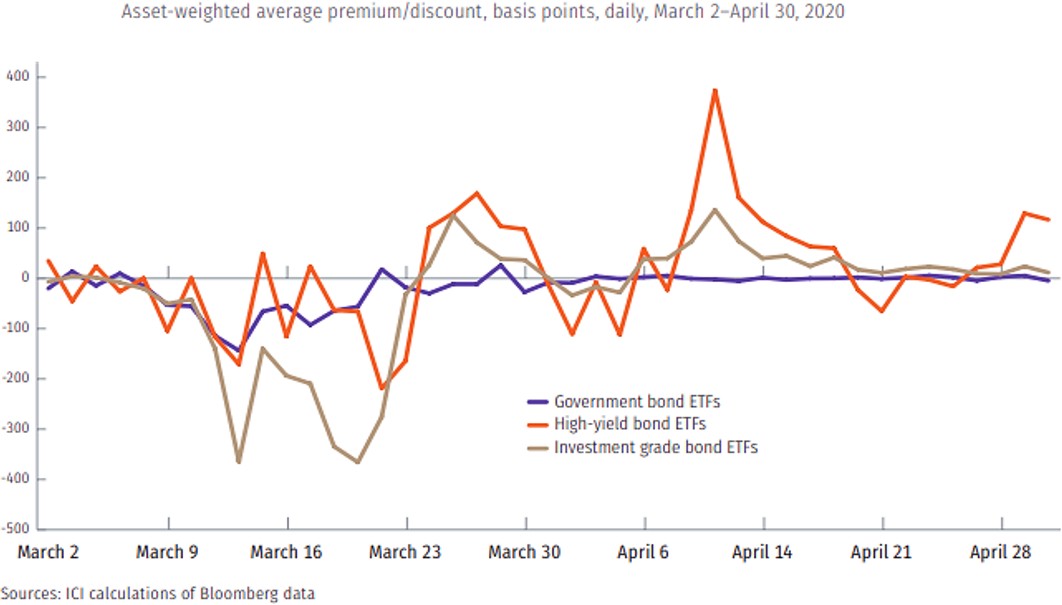 For investors wishing to sell fixed-income ETFs in March of 2020, the price they received would have been less than the value of the bonds in the portfolio. Giving up 300 bps in value is nothing to skim over. ETF investors must be aware of the premium and discount when trading as they present yet another cost that must be considered. Because mutual funds trade at a single NAV price at the end of the day, there is no premium or discount to contend with.

In addition to spreads and premiums/discounts, investors should be aware of a fund’s operating expenses. The operating expense is simply what the fund company (sponsor) charges to create and manage the fund. It is a fee paid directly from the fund’s assets or more correctly stated – your assets.

ETFs made their hay 20 years ago by offering significantly lower costs, compared to prevailing mutual fund fees at the time. As the relationship between fees and performance became well understood, investors ﬂocked to the lower-cost ETF structure causing their assets to balloon, usually at the expense of assets that otherwise would have been placed in a mutual fund. To slow these outﬂows, mutual fund providers had no choice but to follow suit and lower their fees – it was pure capitalism at work!

Though certainly expensive offerings in both structures can still be found, as shown from the 2020 ICI Factbook, the lowest cost Active Equity ETFs (strategies most similar to ours) assess fees of approximately 23 bps with the median being 75bps and the most expensive costing almost 90 bps. 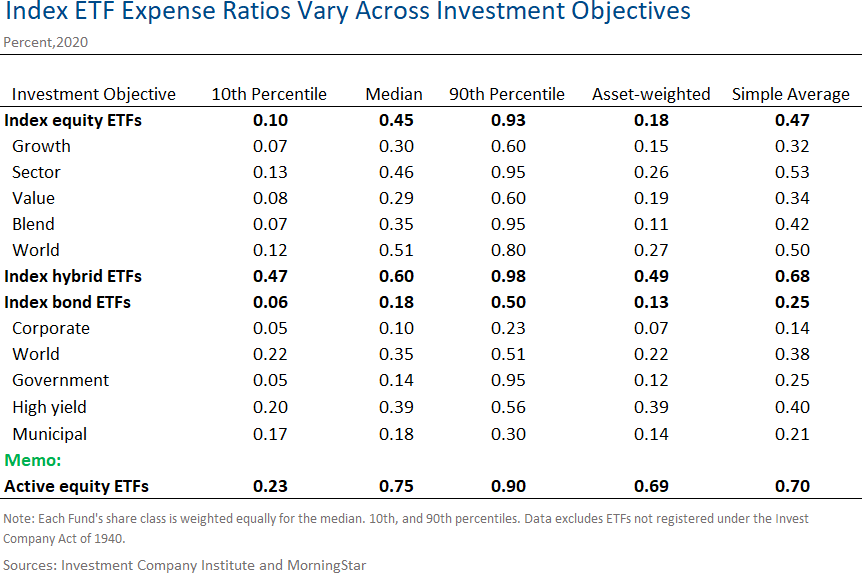 The average Net Expense Ration of the funds we use (.23) is very much in line with the lowest cost (10th percentile) Active Equity ETFs. 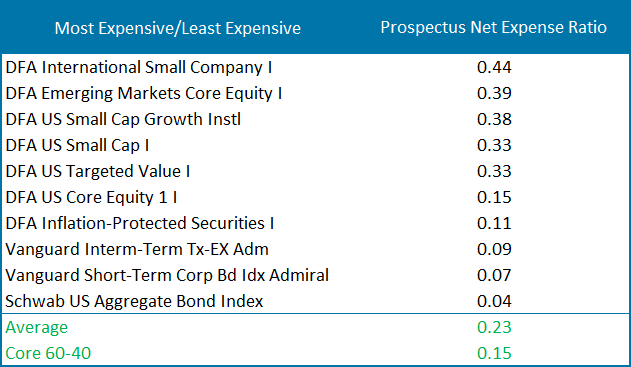 There likely is no greater benefit to the ETF structure than its record of driving management fees lower and saving investors billions of dollars over the past 30 years. As a result, investors today can find low-cost, competitively priced options in both structures.

Perhaps the biggest purported benefit of ETFs is their tax efficiency. Due to the ETF structure, a majority will not make annual capital gain distributions minimizing potential year-end liabilities. The mechanics behind how ETFs do this (the in-kind creation/redemption process) is beyond the scope of this paper. Unfortunately, like trading costs, this unique benefit is often over-simplified and does not reﬂect the whole story.

First, the tax efficiency of any strategy will be strongly related to its investment approach. Low turnover, broadly diversified strategies inherently will lend themselves to being tax efficient. Up until the SEC adopted the ETF rule in 2019, virtually all ETFs were tax-efficient index strategies giving them a natural advantage over their actively managed, higher turnover mutual fund peers. This helped set in motion the dogmatic belief that ETFs are materially more tax efficient. Regardless, today extremely tax-efficient mutual funds can be found. The smaller their distributions become; the more ETF’s tax-advantaged structure will be marginalized. It is similar to two cars going down the highway, one a 55 and the other at 56, you’re going to get to the same place at virtually the same time.

Second, ETFs allow for tax-deferral, not tax avoidance as some investors believe. The graph below outlines how ETFs and Mutual funds differ in their treatment of capital gain distributions.

Assume the two funds represented are identical in every way with the exception of their structure, one is a mutual fund, the other an ETF. Both have a starting NAV of $10.00 and the same $1.00 per year appreciation. If the mutual fund pays out all its gain every year, there will be no gain to recognize at the time of sale as its ending NAV will equal its starting NAV. The ETF, which distributes none of its gains will cause the investor to realize all of them at the time of sale as its undistributed gain will increase the fund’s NAV.

Per KMPG “The deferral of gains at the ETF level using in-kind redemptions for appreciated securities generally doesn’t alter the total amount of taxable gain to be realized when the shareholder ultimately sells or redeems his or her ETF shares” *.

In short, mutual funds are “pay as you go” having an expected higher annual tax liability but a lower liability at the time of sale. With hundreds of millions of dollars of tax revenue at stake every year, one can be assured that the IRS is not handing out free passes to ETF investors, they will collect.

The ETF’s tax-deferral does have some additional benefits, such as the ability to control when that liability is created (at the sale) and the growth of the avoided tax liability, however, again the benefit will be marginalized relative to a mutual fund that also pays little to no capital gains.

Investors all want the same thing, attractive risk, and tax-adjusted returns at the lowest possible cost. Despite best intentions, often the opposite happens. Consider the investor who wanted to move from a mutual fund structure to an ETF structure in the funds listed below.

The funds are identical in every respect except structure. The same sponsor (Vanguard) manages the pair, has the same strategy, and tracks the same benchmark. Yet the ETF has underperformed the Mutual Fund’s Gross Return, Post Tax Return (Pre-Liquidation), and Post Tax Return (Post Liquidation) over the measured 10-year period. Surely not the outcome the investor expected.

The capital markets are always innovating and changing as new products are being introduced daily. Today, there are more mutual funds (7,481) and ETFs (2,632) available than there are publicly traded stocks (6,374 on the NYSE and Nasdaq). With so many offerings, investors can find extremely competitive, low-cost, tax-efficient funds in either structure.

For our investors, we are always evaluating but continue to favor the traditional mutual fund over the ETF as our preferred investment vehicle. Compared to the mutual funds we recommend, there is currently not a tax, cost, or other justification for switching. Of course, nothing is absolute and sometimes a data point may favor an ETF, however, we have found the delta is usually not material or consistent enough to justify a change. Due to the uncertainties that can be encountered when trading ETFs and the potential for unexpected outcomes we remain confident investors are being well served to continue to use the traditional mutual fund structure.